Project CRX is ready to take on Summit Point Main with IMG Racing armed with a freshly rebuilt motor and new suspension (thanks to Todd Reid).

Sorry for the lack of updates, Honda fans. As one can see, Project CRX faced a slight hiccup in the form of a broken piston pin early on during the Devil in the Dark enduro.

The 2014 racing season will be here soon and Project CRX has been bolstered with a new used motor, safety upgrades, and most importantly an expanded roster of talent and know-how.

Body and glass work has been completed.

According to Martin S.:

After a successful debut race day at Summit Point with a first-place finish by team driver Martin Szwarc, the second day ended early with a gentle roll in the gravel in the rain.

The damage appears to be mainly cosmetic, with just the windshield having shattered and some body panels slightly crumpled.

After a short hiatus, good progress has been made on Project CRX:

After an unproductive but fun social outing at Entropy, here’s what we’re looking at direction wise:

Also, we have a proposed date for a new test date. The new date is the Friday test day before the 12 Hr Devil in the Dark. It’s an open test day, hosted by NJMP, for race license holders only. It’s a more restrictive day than the VIR event, and we can only designate one driver for the car. It does, however, have the potential to be a more productive day if we set up a test schedule beforehand, bring the right equipment, and take it as a serious test. 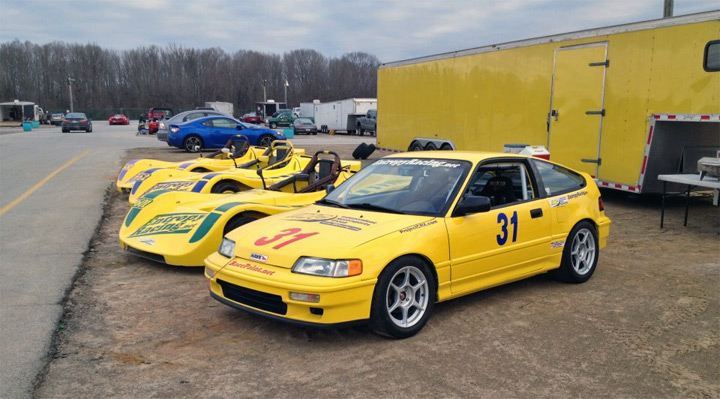 Project CRX's shakedown at Virginia International Raceway's Full Course layout did not go as smoothly as desired. A few suspension oddities and flatspotted tires made it an interesting weekend for the team. Thankfully, Charlie of Entropy Racing and the Project CRX team were able to sort out of some of the issues in the paddocks.

Stay tuned for more updates as the team figures out their suspension issues in preparation for their May 27 Lime Rock Event.

With our first shakedown date of 2013 approaching on March 2nd at VIR here is a look at the car in its current form. 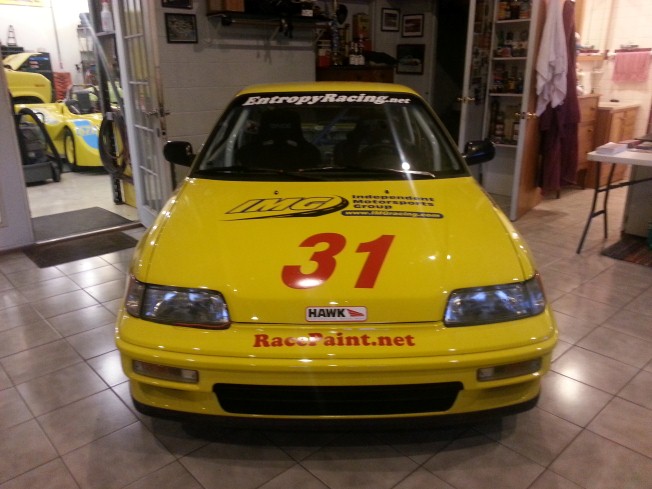 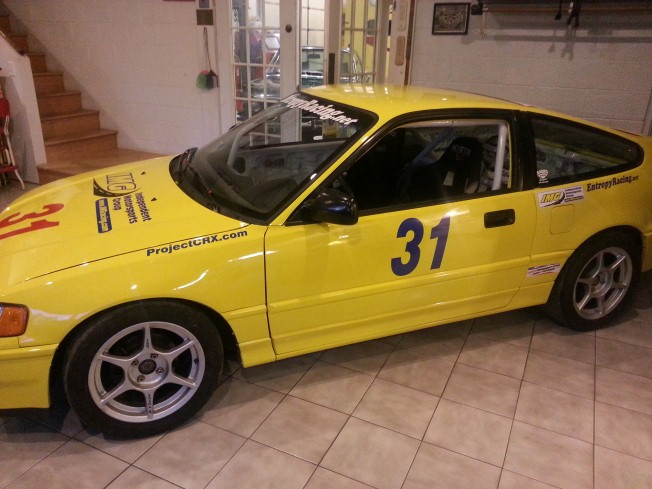 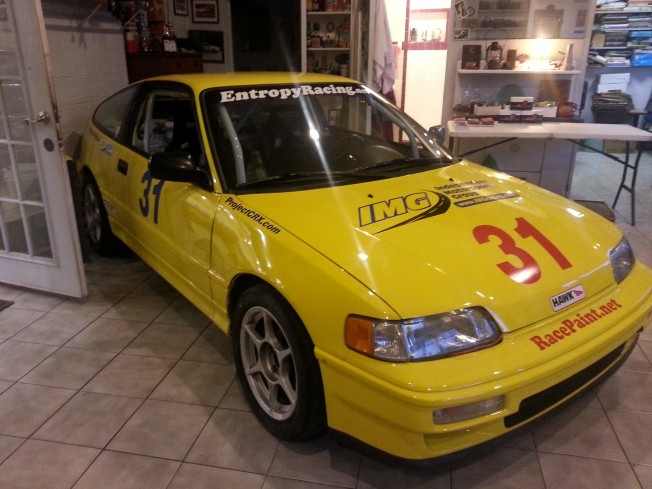 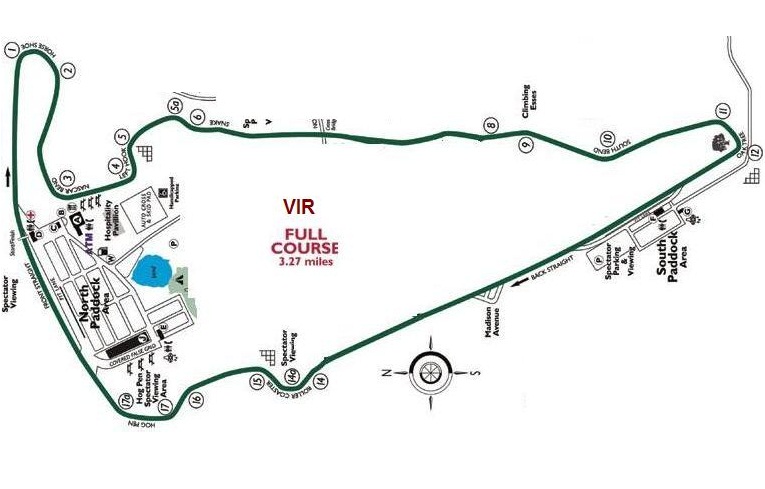 It's been a hectic few months. So hectic in fact that we haven't even had the chance to update the site. On the upside, in the three and a half work weekends we've had since the last update a tremendous amount of work was accomplished.


The autopower roll cage was updated and customized with driver's side NASCAR bars, roof bar cross bar, front legs that extend into the dash, and larger, and stronger foot plates. Soon after, Travis at RacePaint did a beautiful job of fixing up the CRX's rusty bodywork and finished the sheet metal with grey and yellow. A brand new windshield replaced the cracked screen, and an a race interior was installed with a dozen bolts and a lot of hammering. Under the new bodywork, new control arms fitted with polyurethane bushings now support the sub-2000 lb chassis with GC coilovers and Koni dampers.


As of now, we have a fully functioning, drivable race car. Just a few small bits left to install, and the CRX will be ready for its first test on March 2nd at VIR.

It was a busy, beer-filled weekend at Entropy Racing. All team members were in attendance (at some point) and with the assistance of the ever-capable Charlie and Dale all saleable and salvageable components were pulled and/or torched from the original blue race car. After removing the roof to later replace the yellow car's sunroof, it was loaded up on the flatbed to be sent off to the scrapyard.


The yellow car is up and running after the weekend of work including interior removal, an ECU swap, compression checks, Sea Foam administration, new gas, and more. It's now ready to receive a cage (out of the scrapped CRX), paint, and a stiffer-than-broken motor mount.


Thanks to the hospitality of Jeannette, those who stayed both days received a good meal and a comfy night of sleep.

Check out pictures from the weekend here.

We were able to get both cars into our base of operations over the weekend at Entropy Racing. After looking over all of the options available, the decision was made to cut the cage out of the blue naked chassis and transfer it into the yellow donor car. We took the front and rear subframes off the blue car as well. Hopefully they'll make for good backups in case the worst happens.


The new yellow car is an Si chassis and has a moonroof which is adding useless weight to the highest point of the car. This is one of the supporting reasons to take the cage out and move it since it will let us chop the roof off as well. Next post we will hopefully have a running and functional car that can be moved under its own power.

We have found a car for our donor motor and trans! Good news everyone! The car is located in Maryland and the plan is to pick it up and have it towed to our base of operations for major surgery transplant, mad doctor, Frankenstein-style work! 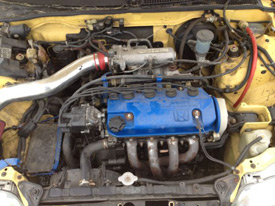 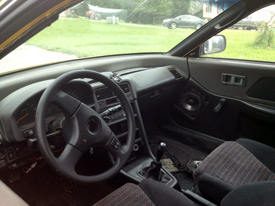 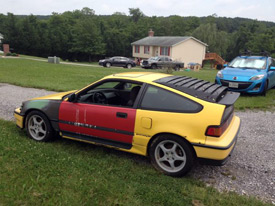 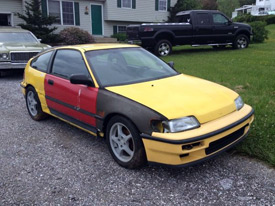 Today marks the start of the project as our chassis has been acquired. Thanks to a quick acting team member we were able to acquire a 1990 or 1991 Honda CRX chassis. We're not quite sure what year it is but according to the VIN we're working with a 1990 car. 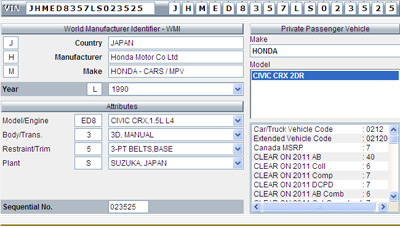 Now all we need to work on is a good name for the car. If you have any suggestions please send us your ideas!